Report not because I was using an armored company, but because my opponent did. Quite a game! 21 panzerdivision (panzergrenadiers) vs a company with 9 IS-2 and sturmoviks.

The panzergrens were von luck, 2 big panzergren units with fausts, 4 panzers (ijcluding a firefly), 4 panzers more (including a normal Sherman 3), 3 pak38 (useful against anything except side armor

and a unit of 3 foot recon.

The scenario was Surrounded, so my recon did great simply not dying. I defended. 1 platoon of infantry in each objective and the panzers in the northern hay field and hugging a forest.

I concentrated in one of the IIS units, trying to catch them in a crossfire (dealing with side armor 8 with panzers IV is difficult. I managed to neutralize one of the units by turn 3 or 4, I think. One IS2 remained, but it was way out of position and having lost its command could not move. The other IS unit was tougher.

The table at the end of turn 1 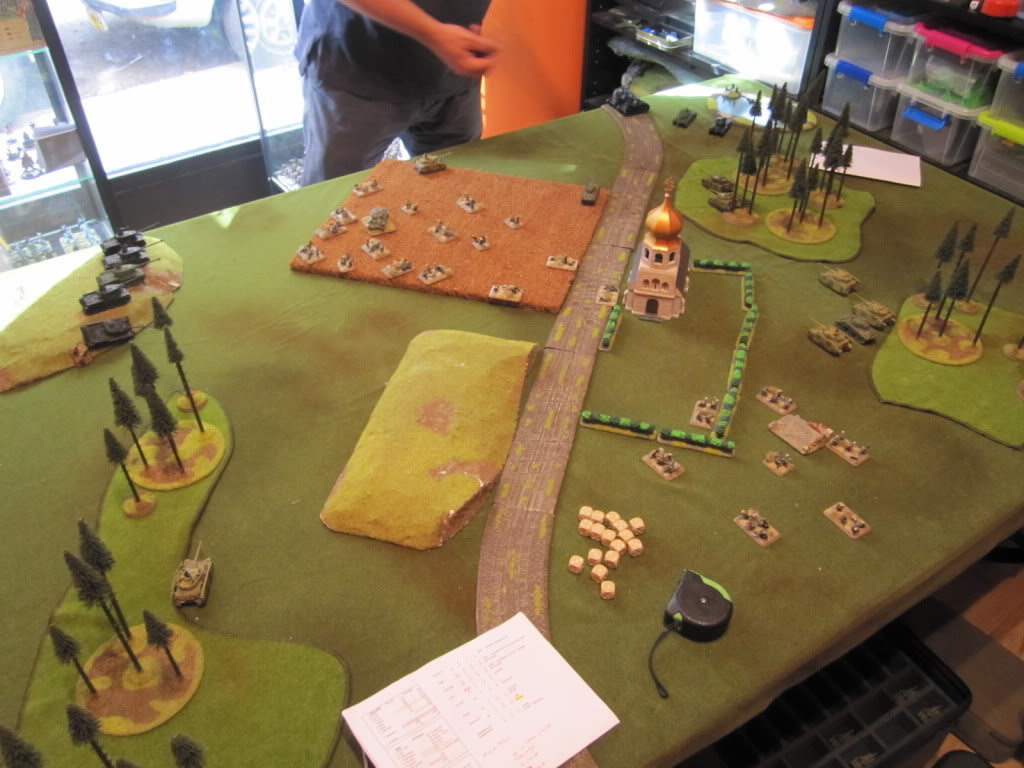 My pressure by both panzer units on the right IS unit works with some luck and I manage to destory 3 of them by outflanking the buggers. In the meantime lurks in the left forest and does a lot of nouse to attract IS2 love. 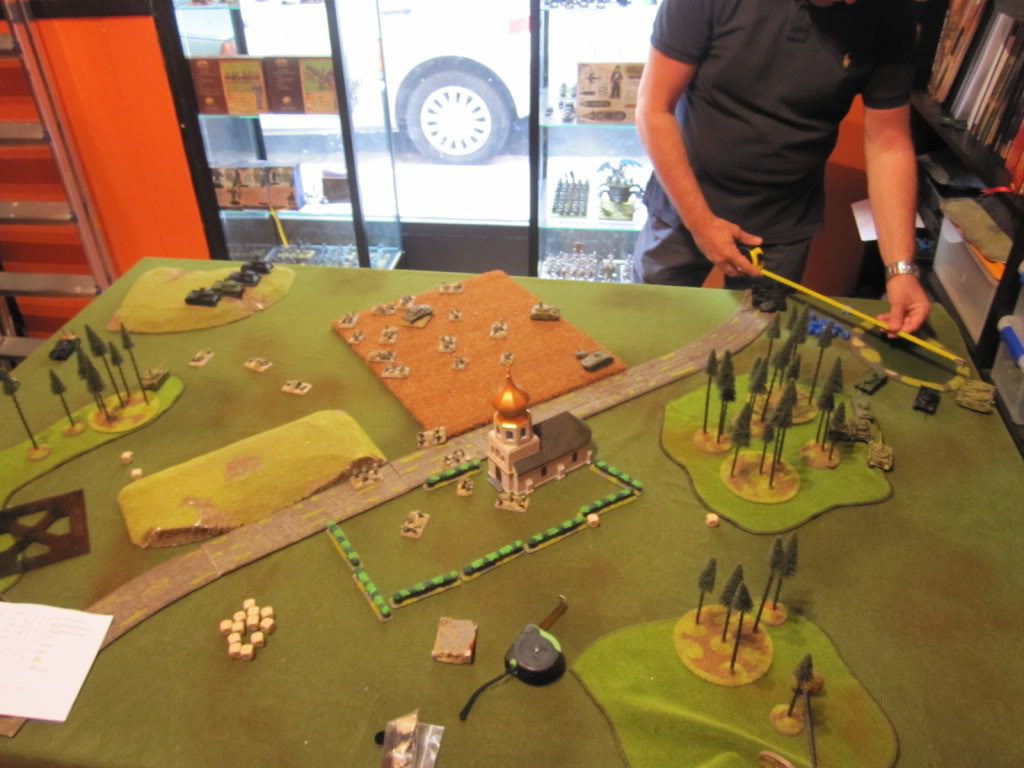 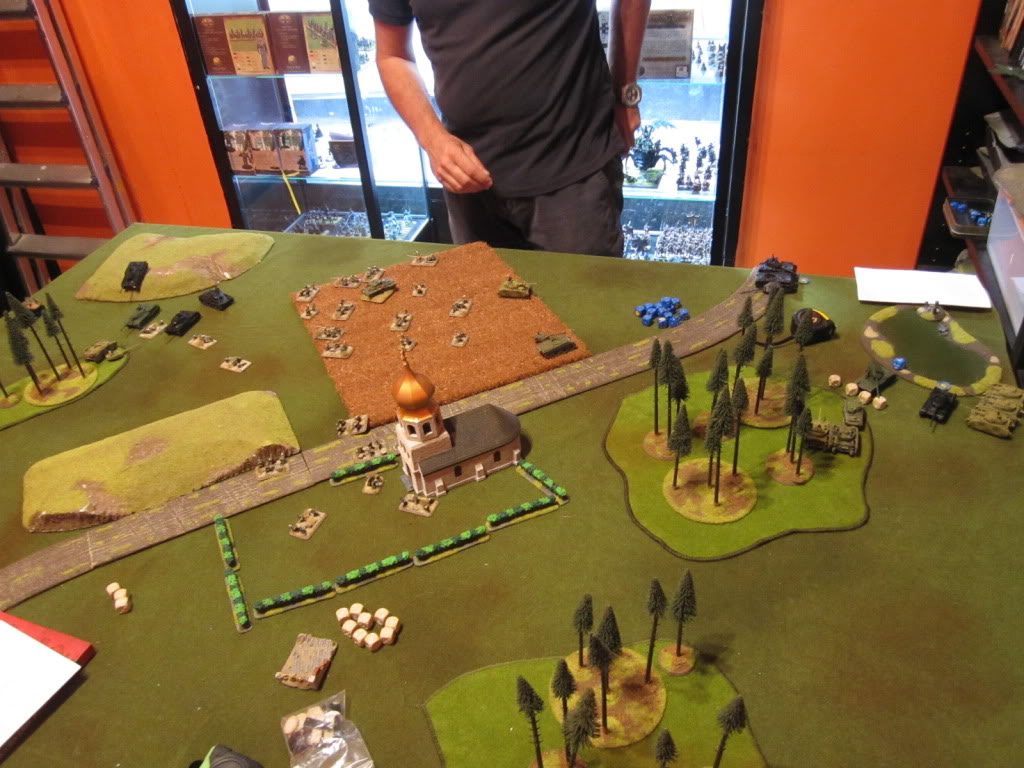 When they assaulted my infantry and pak38s it was pure carnage. And they refused to die (damned rear turret MG…). Luckily enough my infantry (with the help of the CiC managed to hold the ground and eventually my tanks arrived and played at “shot the heavy tank in the barrel”. Between the abysmal shooting of my opponent and my fairly average dice I managed to hunt down them, and eventually killed the HQ as well scoring me a 4-3 hard fought win. I was half ill during the game.

Here they come! Observe the panzers IV in the south of the picture, redeploying to the IS2 flanks. The southern infantry has an identity crisis, but has understood that their objective is not threatened and is moving north to help their colleagues. When not pinned by air, that is. 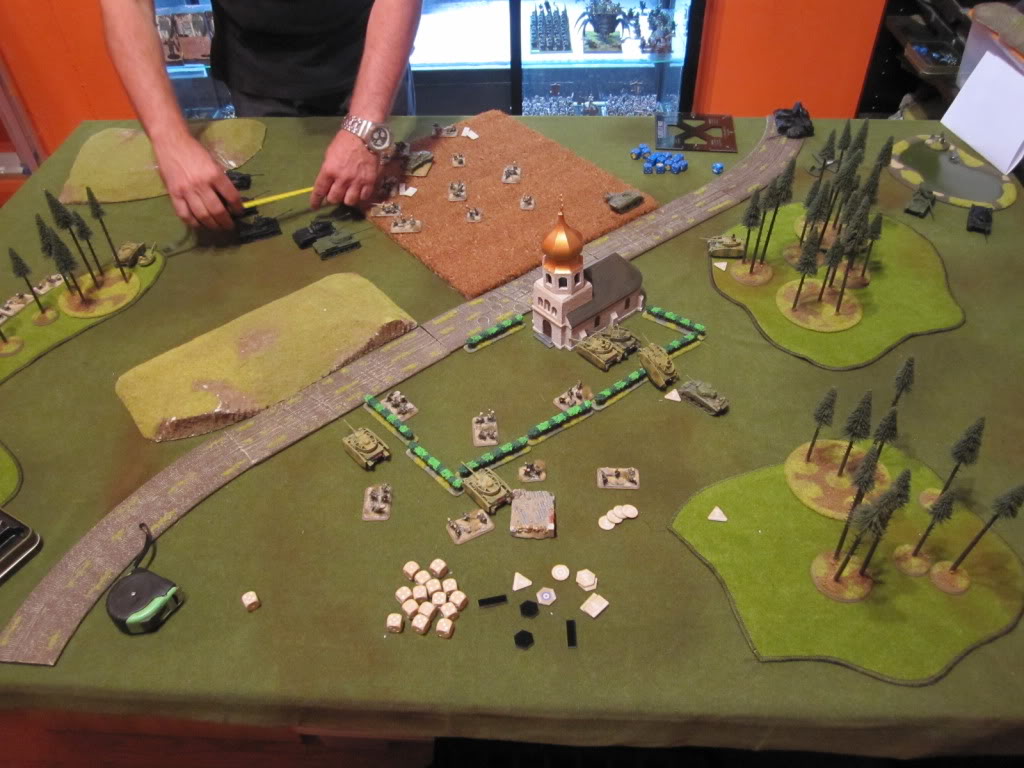 My infantry retreating from the onslaught 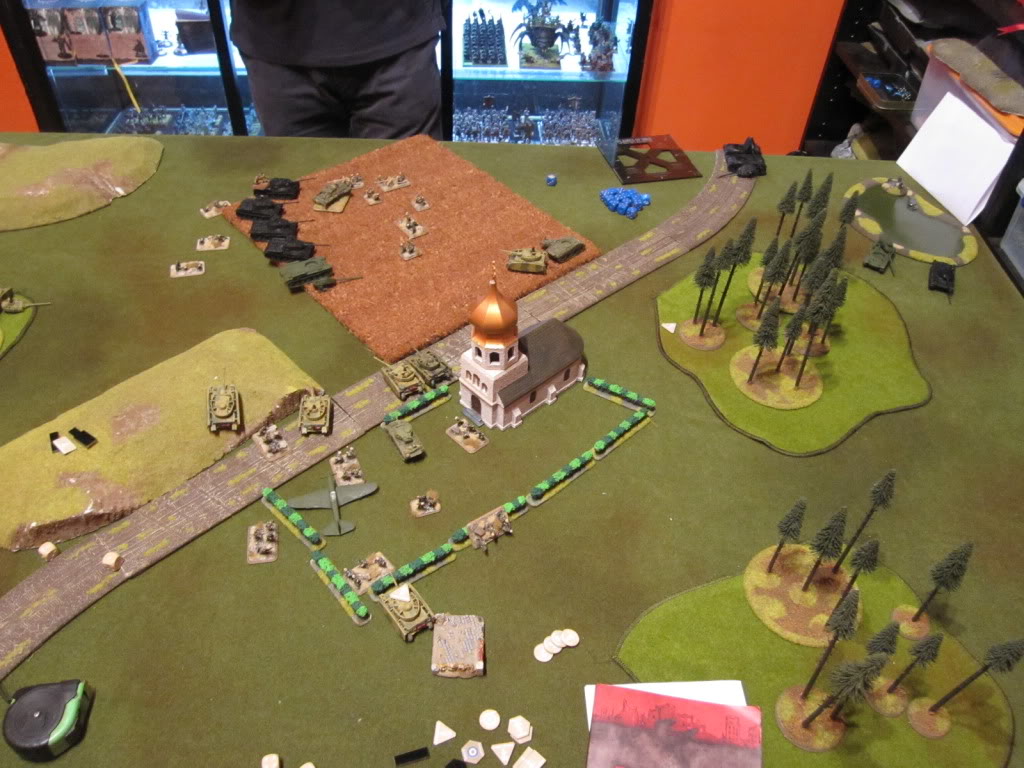 My dead by this stage 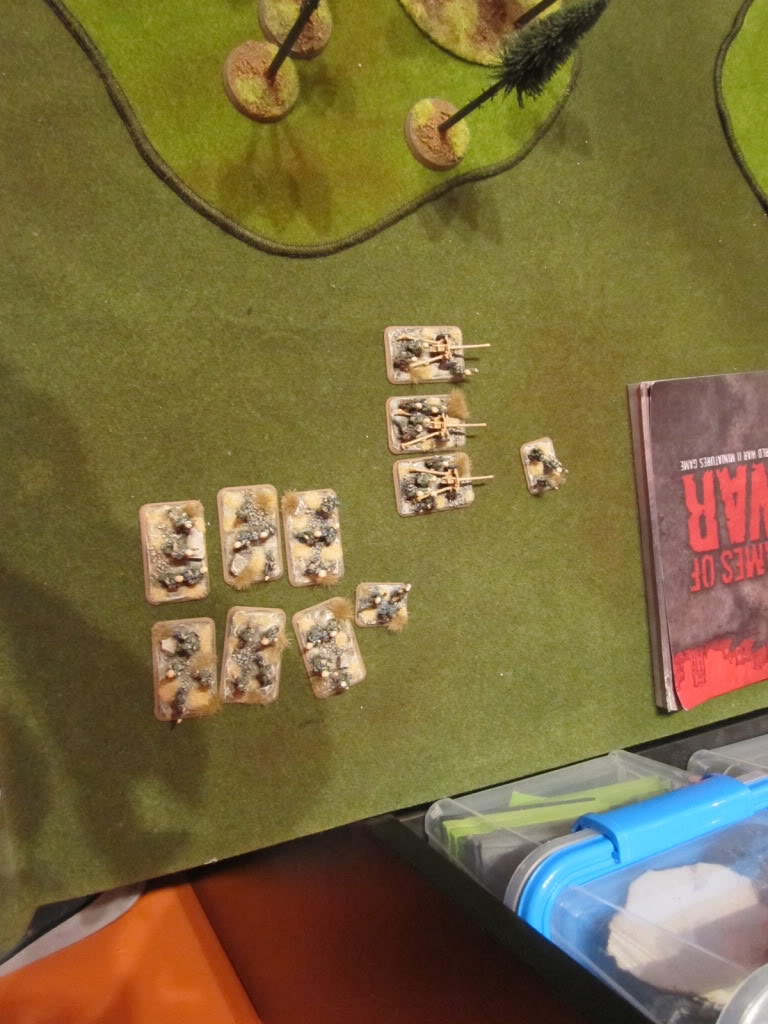 Party in the hayfield! Slowly I won flanks and killed each IS2. I killed one IS each 2 turns or something like that. We ran into the 20 turns or so easily. 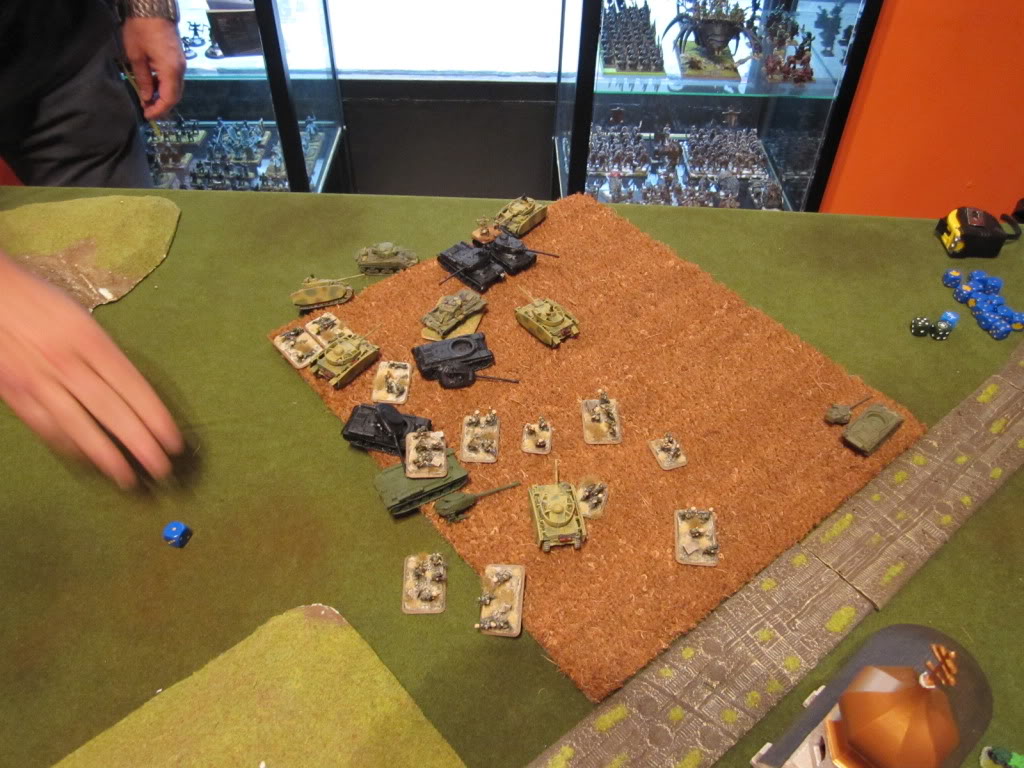 Final stage of the battle. The IS leader goes down and it is victory for me. 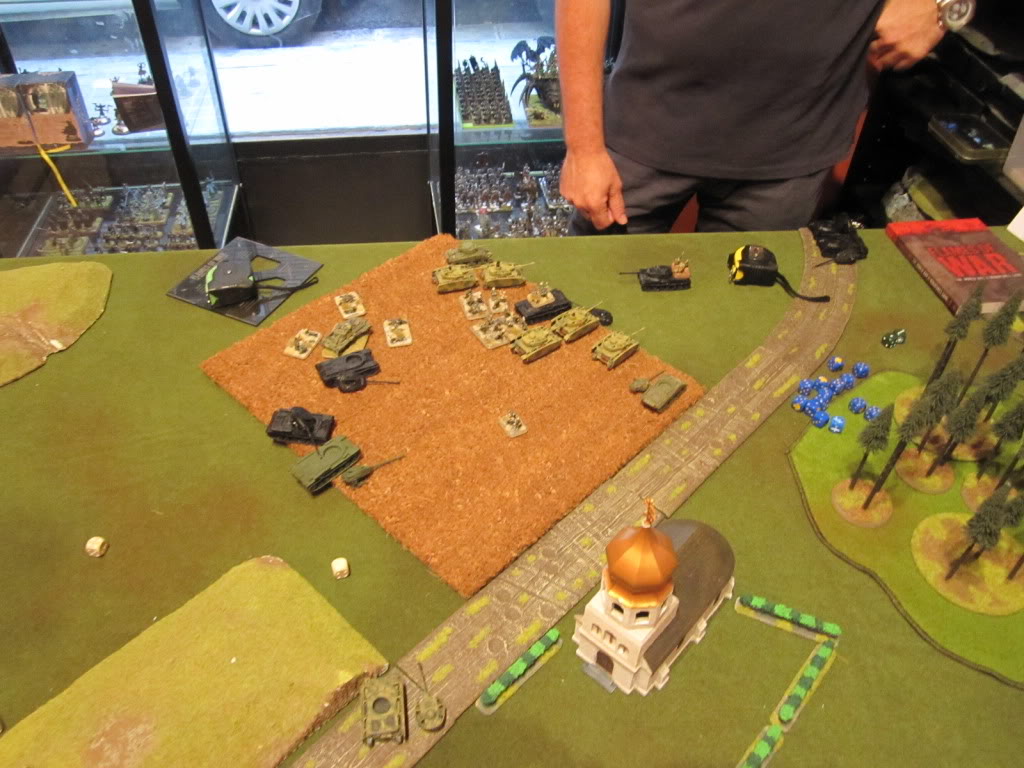 Von luck played quite a pivotal role in the game, even if he did not kill anything by earning me time. His appearance distracted the second unit of IS2, delaying the assault until they dealt with him. My opponent commented that this had been his main mistake. Mine had been to overexpose the first panzer unit to air attack in the hay field. He payed more dearly than I for the mistake since it allowed me to recover positions with my panzers and prevent the capture of the objective.

1. Heavy tanks are difficult to hill with AT11. The firefly scored one early in the game, but after that was smashed by airplanes. Some stukas would have been great.

2. The list I used was MUCH better than the armoured list I was thinking to field. It gave me time, that is what I needed. I think I would have performed worse if I had had tigers. Basically because I would have lacked the infantry support that died like heroes and effectively won the game for me delaying the capture of the objective for 3 turns.

4. Recon was useless in this mission. But it would have been useful if I had been the attacker against an infantry list, so was not a bad inclusion.

5. If your enemy cannot hit you it does not matter if your armour is 6 and his AT is 15. The lack of ROF marked quite heavily the game, since he rolled bad, and statistics do not work well with a small number of dice. He was hitting me on a 5+ for most of the game. Even when I was a few inches away from him and in his flanks. A unit of T34/85 (or even normal T34s) would have been more dangerous for me. The big guys are great vs heavy armor, but against light armour like panzer IVs they are overkill.

That would be it. Amazing game against a very nice (new) opponent. I am extremely happy with today’s game.